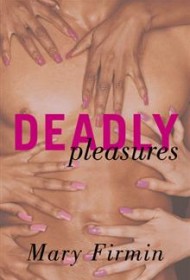 Sex and the City meets James Patterson in this tale of friendship that’s peppered with enough thriller action to make Deadly Pleasures a solid guilty pleasure.

At the heart of the story is Southern California real estate agent Megan Riley and her three friends who each are at different stages in their relationships. Out of boredom while hanging out at the Bayside Yacht Club, they concoct the idea of hiring a hunky stripper as their gigolo. Little do they know he has become the prime suspect in a string of serial murders after police learn he was one of the last people to visit one of the victims.

The book is not for the faint of heart, as author Mary Firmin graphically details what police call the “Bondage Murders” — named for the fact each of the four victims was found bound to beds and stabbed dozens of times. Raw, too, are her descriptions of the bondage parlors and secret sex clubs the Los Angeles police visit in their efforts to solve the gruesome murders.

Drawing on her experience as a Santa Monica real estate agent, Firmin gives a convincing representation of Southern California and its lifestyle, down to what the women are wearing — an Escada suit in one case, a sapphire St. John suit in another.
The dialogue, however, occasionally turns sappy. For example, when the gigolo describes why his boat is named Moon River, he says, “Have you ever seen a full moon suspended just above the ocean at night? It leaves a silvery river on the sea. That’s my Moon River, a shimmering pathway to adventure. Someday I’ll follow it wherever it will take me.”

Despite such flaws, the book breezily moves forward with the discovery of each murder. The characters are likeable enough, while the story screams screenplay as everything from a yacht blowing up to a break-in by a masked stranger keeps the action fresh.