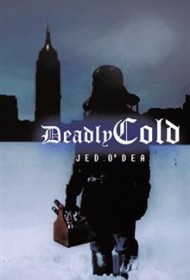 The sequel to 2014’s Tucker’s Discovery, Jed O’Dea’s latest continues his series featuring husband-and-wife scientists Tucker and Maya Cherokee as they attempt to save humankind from a catastrophic natural disaster that not only threatens to kill millions of people but also puts the world in a dangerous geo-political flux.

When two volcanic eruptions of unprecedented magnitude throw the civilized world into chaos by ejecting enough ash and debris into the atmosphere to radically impair the sun’s ability to heat the earth, the world’s population quickly realizes that this could be the beginning of a new Ice Age. Temperatures around the planet plummet, water supplies become contaminated, and millions of people lose power. Food and fuel supplies dwindle.

To make matters infinitely worse, a mysterious terrorist known only as “the ghost” begins destroying power sources and fuel reserves all over the world. Meanwhile, the Cherokees, who have been living in New Zealand under the FBI witness protection program after discovering a world-changing, energy-producing technology that made them targets for kidnapping and assassination (see events of Tucker’s Discovery), are tasked with the impossible: to find a way to save millions of people from freezing to death. But when the ghost begins targeting the Cherokee’s extended family, things get personal.

Fans of apocalyptic fiction will enjoy this novel’s thought-provoking scenario. The character development is strong, as is the author’s detailed description of the myriad consequences (political, sociological, and natural) that the volcanic eruptions trigger. That detail, however, markedly slows down the momentum of the story and, especially towards the end, negatively impacts what should have been a breakneck-paced and breathtaking conclusion. That issue, however, is relatively minor considering the collective strengths of the novel.

Memorable characters and an intriguing storyline make this a page-turner that will appeal to a wide range of readers. Apocalyptic fiction, suspense/thriller, and mystery fans alike should find this a highly entertaining read.