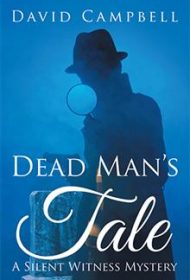 The story involves a student nurse discovering that a comatose patient has been swapped with someone else, and the real patient is missing. The detectives—mostly Barrett—delve into the mystery until Dent is hospitalized with stomach problems and disappears after the first third of the book. As Barrett continues the investigation alone, he must wrestle with an uncooperative hospital staff worried about its image, oddly unconcerned relatives of the missing patient and his own romantic urges.

Barrett and Dent are like characters from central casting for a buddy-cop film. That’s one of the problems with the novel: Its predictable police procedural plot is married to a predictable medical plot. Campbell also slows the pace with unimportant details that add little to the narrative, including a long paragraph about a sheriff explaining to Barrett why he gnaws pencils (he stopped drinking coffee after a fight with his wife) and a fast-food lunch described in wearying and unnecessary detail.

Campbell also manages to weave in a distracting soap-opera romance: Reese is attracted to Grace Evans, the student nurse, even though he recognizes her from a previous case in which he fumbled the investigation into her husband’s murder. Finally, the story comes to an anticlimactic, unsurprising conclusion.

The writing also suffers from technical issues. Mostly told in third person, the novel slips occasionally into a first-person point of view, using “I,” “me” and “we” (as in “The lieutenant hung up on me before I got a chance to find out what happened to Charlie.”). In one passage Grace is called Gabby, the name of the missing man’s wife.

In sum, while the missing-patient plot twist offers some promise, the story’s flaws are likely to hamper the book’s overall appeal.