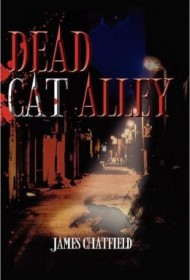 In the year 2025, newspaper editor Justin Wright takes on the establishment to find justice when a homeless woman is murdered and one of his young reporters is assaulted. The crime takes place in a Sacramento alley, the famous Dead Cat Alley, known for its public arts project: ceramic rooftop cats with over-sized eerie eyes. Soon it appears that the murder and assault may have been unrelated and that the reporter may have been working on a story with important implications for a local politician.

Despite the futuristic time frame, Dead Cat Alley is anything but sci-fi. Rather, the book is a straightforward mystery in which people struggle with the same problems as today: relationship issues, balancing work and home life. Politicians are still caught up in power grabs; local governments are still arguing over funding issues.

But the heart of this story is a subject clearly near and dear to veteran journalist Chatfield: the survival of newspapers. While editor Wright laments the slow demise of the newspapers of his day (“We’d bleed for stories, and some guy in a suit who never even saw the inside of a newsroom decided we should put our work online for nothing”), the Newspaper Preservation Act of 2014 has made papers viable again. Information is conveyed and constantly updated on thin sheets of plastic embedded with multicolored silicon particles that rearrange themselves via microelectric currents. The so-called ipapers can be folded, pocketed, unfolded and recharged.

The mystery is a puzzler — even down to the last page — but in a good way: readers wondering whether their take on the whodunit is what the author intended will want to discuss the ending with others.

Chatfield makes some rookie mistakes: a cheap name change muddies the mystery waters, for example, and typos and dropped words abound. Still, if you’re passionate about newspapers, like a good mystery, and want a glimpse of the near future, you’ll want to “read all about it” in this appealing novel.