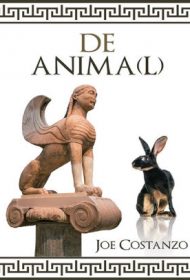 Joe Costanzo’s thought-provoking novel, DE ANIMA(L) takes readers into the world of academia, where a professor’s well-intentioned Socratic lecture sparks passion and controversy about animal rights, ultimately causing characters to re-examine their beliefs regarding the value of human and animal life.

When the jittery, overweight jackrabbit mascot at Gennesaret Christian College goes missing, an enigmatic symbol left behind suggests a connection to the new adjunct philosophy professor, Edward Stathakis, and a group of his students. In a recent discussion about Aristotle’s “De Anima” treatise (On the Soul), the professor used the same symbol to stimulate classroom dialogue about whether animals have souls, and their comparative value to human life. As authorities investigate the missing rabbit, the imaginative and surprising plot includes a suspicious fire that destroys a lodge owned by a wealthy benefactor and avid big game hunter, intentional “accidents,” including one that lands Edward in the hospital with a broken leg, and a deadly tragedy.

To bolster sentiments on both sides of the animal controversy, Costanzo offers a wide array of characters—from kind, introspective Edward, to his sometimes dangerously impressionable students, to a self-serving dean and an astute, personable detective. The backdrop of a Christian College provides a minor religious component.

As relief from the chaos, the author offers romantic opportunities for his protagonist, although one such interlude seems a bit contrived. Likewise, the punishment rendered for destructive criminal activity seems too easily plea bargained. (Also, some copyediting errors exist, though none are particularly distracting.)

Fluid dialogue and questioning conversations provide ample opportunity for characters to explain their personal stances on animal rights. Costanzo cleverly brings the story full-circle by re-introducing the four-footed star who unexpectedly proves a saving grace in the final chain of events.

Overall, this is an entertaining read that strikes at the heart of ethical considerations. Edward’s parting words to students at semester’s end are sure to have readers pondering how far they’d go to honor their own convictions.