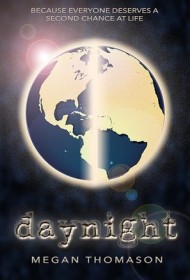 In this gripping young adult dystopian novel, “Recruits” such as 17-year-old Kira are brought to another planet where nothing is as it seems.

Kira’s decision to spend her senior year away is finalized after she discovers her boyfriend making out with her best friend at a party. She races out of the house just minutes before it explodes, killing everyone inside. Her grief and survivor’s guilt propel her to accept the offer from the Second Chance Institute (along with the promise of a hefty college scholarship), having no idea who she’ll find at the Institute, or that she’ll be traveling to another world.

She is partnered with Blake, a skateboarding loner from her school, and they spend their first days being examined by doctors and learning the many rules. Two confuse and concern Kira the most: the rule against revealing anything about the past to the “Second-Chancers,” an unusual class of beings who live at the Institute, and the practice of Cleaving, a form of marriage that is mandatory for any couple that has sex. Kira has no intention of “cleaving” — it would mean she could never return home. And while attracted to good-looking Blake, she can’t forget Ethan, the boy she met at that fateful party.

Told through Kira, Blake, and Ethan’s viewpoints, the compelling conflicts and high stakes drive the powerful narrative. Though the reader knows more than Kira, the surprises keep coming.

Because of author Megan Thomason’s strong writing, minor weaknesses pop out. Ethan and Blake, despite having very different upbringings, have nearly identical voices, and the love-triangle that develops is reminiscent of the romantic conflict in The Hunger Games. Sometimes Kira accepts aspects of her situation too easily, and an important scene that should have been shocking falls surprisingly flat. However, the story is a page-turner, with engaging teenage characters. Readers will be hungry for the sequels in order to find out what happens next.