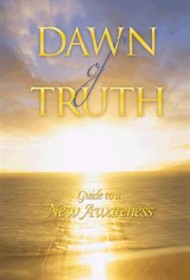 Dawn of Truth is a work of New Age nonfiction wherein one man relates his religious upbringing and subsequent spiritual awakening. Less a memoir than philosophical overview, author John B Leonard ties together 12-step recovery literature, the works of Edgar Cayce, aliens, channeling, and other strands of thought, and links them to the teachings of the Christian Bible. It’s a daring undertaking, but not without faults.

There are a few lovely, thoughtful passages here, as when Leonard declares, “we grow to heaven as we develop ourselves, rather than go to heaven upon death because we accepted a particular creed.” But the book is disorganized, both thematically and in terms of tone. It seems to start off in a question-and-answer format that draws parallels between Christian and New Age beliefs, but that structure isn’t consistently maintained. A metaphor comparing frog egg clusters to God is difficult to follow, and a hand-drawn diagram illustrating the soul’s journey is hard to read and not given sufficient explanation. With such esoteric subject matter, more grounding details would be helpful.

Leonard goes out of his way to take personal responsibility for his views, pausing often to note, “this is just my opinion,” but then reveals he’s writing under a pseudonym. What at first seems generous then appears to lack conviction. Two brief sections dealing with abortion and the 9/11 terror attacks are potentially offensive. The former is medically unsupportable and irresponsible. As for the suggestion that those who perished in the Twin Towers were heroes but those who ran to safety were cowardly? Maybe the author’s use of a pseudonym makes sense, after all.

Leonard feels strongly that his experiences and perspective can aid others on their spiritual journeys. He would best serve that aim by dedicating sufficient space to more thoroughly document and explain his ideas. Though it would require exploring fewer topics in more depth, this would make for a much more accessible book.