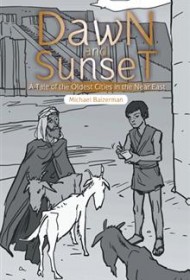 The beginnings of ancient Mesopotamia and its subsequent evolution into advanced city-states provide insights into the concept of modern government and its changing function over millennia in Michael Baizerman’s Dawn and Sunset.

Baizerman’s well-researched account has an ambitious agenda: to examine under the microscope practically every aspect of southern Mesopotamia’s earliest residents, the Sumerians — their writing, arts and crafts, foods, foreign trade. While it mostly succeeds, the dry dispensing of facts (sometimes with typos) reads like a textbook, potentially deterring all but the most determined history lovers. Fairly comprehensive sources complement each chapter, but some of the referenced images are reached by such convoluted online links that they end up being impractical points of study. Perhaps the author instead could have included some of these images in his book.

There are other issues. At one point, Baizerman bemoans Saddam Hussein’s draining of Iraq’s priceless marshlands, framed by the Tigris and Euphrates rivers, once considered the third largest wetland in the world. This sudden time leap and environmental lesson seems forced and out of place in what is mostly a linear timeline of the Sumerians. And, although Baizerman captures the mechanics of the spectacular rise of a glorious civilization, his description of its collapse is muddled and hurried.

Though the book has a few illustrations, a more generous sprinkling of pictures (and even maps) and a more accessible narrative style would have made this well-intentioned volume more appealing. Nevertheless, Baizerman’s vast stores of knowledge make their way onto the pages, and there is plenty of interesting trivia — such as information on the invention of the cylinder seal — to satisfy the determined reader.

History and anthropology geeks might appreciate this insightful but plodding look at the many facets of an ancient civilization.