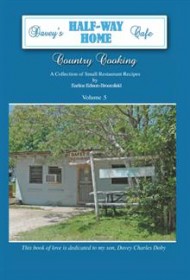 In just about every American town you’ll find a small restaurant where someone like Earline Edison-Broomfield treats customers like family. The owner of Davey’s Half-Way Home CafÃ© in Mississippi, Earline poured her heart and soul into her country cooking until she retired in 2010 at age 80. This cookbook is a paean to her love of cooking and desire to share her recipes with future generations. It’s also a love letter to Earline’s children, with random reminiscences, family history, religious sayings and words to live by. (The recipes end on page 158, with the book’s remainder devoted to a customer list and family tributes.)

Even diehard foodies will enjoy perusing the recipes, searching for those gems from yesteryear, when calories didn’t count. The cookbook is loaded with down-home standards (deviled eggs, candied yams, chicken pot pie, cornbread) and variations on well-known recipes of the time (green bean casserole and cherry dump cake, with their prodigious use of canned soups and convenience foods). And, of course, what’s a Southern cookbook without desserts, which here range from molasses cookies to apricot nectar cake to chocolate pie?

As with most good cooks, Earline probably had the instinctive know-how to turn basic ingredients into a stellar dish. However, there’s a big difference between a cookbook you value for nostalgia and one you value for cooking instruction. Many recipes here lack sufficient direction, and it would have been nice had personal notes introduced each recipe for further elucidation. (For instance, Earline includes four basic biscuit recipes. All things being equal, is it better to make the one with three cups of flour and three teaspoons of baking powder or four cups of flour and four teaspoons of baking powder? Readers can only guess.)

Despite its flaws, Davey’s Half-Way Home Cafe is a pleasant walk down memory lane. It’s the kind of book to be browsed on long, lazy days when readers want to remember the way we were.