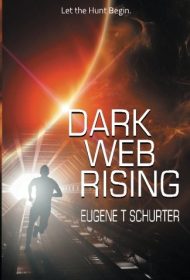 Schurter’s writing bears the simultaneous imprint of Tom Clancy and William Gibson in this story of a hacker who stumbles upon a dangerous conspiracy and, as a result, must flee across the United States. It’s an ambitious combination of voices and narrative ingredients, one that borrows from spy stories and cyberpunk fiction for its foray into young adult fiction.

The story takes place in a high-tech near future and revolves around Stewart Breston, a young computer whiz who, along with fellow members of an underground online group, is engaged in discussion regarding government reform. When the powers that be try to hack into his group’s online database, Breston fights back, disabling the effort and returning fire with a serious and debilitating hack into the Central Security Agency.

As a result, Breston must flee across the country in an effort to escape his new pursuers. In the process, he learns unsettling secrets about his enemy and his erstwhile friends, and his flight takes him beyond the bounds of earth.

Schurter largely succeeds in juggling narrative styles, although his effort occasionally gets bogged down by overly detailed tech-speak and a lack of editing. For example, Schurter devotes entire chapters to online battles between hackers, scenes that incorporate plenty of technical language but little in the way of actual, physical action. Combined with some errors in basic grammar and punctuation, these stretches distract from the novel’s larger arc and excitement.

The themes, however, are unassailable. Schurter’s dystopian vision of the overreaches of government echo deeply in the era of Edward Snowden, and Orwellian warnings undergird its action/adventure elements.

All of this may be daunting for casual teen readers, but those with an interest in tech-based thrillers, traditional espionage stories and science fiction will find plenty of promising material here.