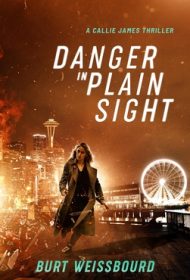 With Danger in Plain Sight, Burt Weissbourd delivers a polished page-turner about terrorism, money laundering, and the price of sins rooted in avarice.

Two years later, Callie is shocked when her ex-husband, French investigative journalist Daniel Odile-Grand, reappears seeking sanctuary while working on a blockbuster story. Still nursing hurt feelings, Callie rejects Daniel, who is then nearly killed in an intentional hit-and-run assault outside. After Callie hides the gravely injured Daniel, only to be threatened by Daniel’s enemies, she reluctantly turns to Cash, her most dangerous asset.

The story features a rogue’s gallery of bad guys, including Avi Ben-Meyer, a slick Argentine investment mogul, and his icy wife, Christy, who are working a scheme to launder criminal currency. We soon learn that Daniel’s reporting has uncovered ironclad evidence tying the couple’s business empire to a shadowy underworld that involves a dangerous Lebanese terrorist.

After violence visits Cash and Callie, Cash unleashes his crew, including a high-risk mercenary, a veteran of the war in Afghanistan and a Jewish fixer, while the enemies employ a preternatural tracker and a zealot-turned-assassin to terminate our heroes.

The intricate plot is more serviceable than spellbinding; the racket at the story’s core is merely a catalyst for the action, which comes fast and furious via chase scenes, gunfights and violent retribution. While a few characters are nondescript — the inevitable hard-nosed cop, for example — the story hinges on its outlandish villains and character reversals. It’s not hard to guess that devilish Cash might have a heart of gold, but Callie’s metamorphosis in the wake of violence is an unexpected surprise.

Tart dialogue, explosive set pieces and a dexterous narrative style that favors velocity over exposition add to the book’s appeal.

Thrillers may be a dime a dozen but memorable characters deserve a longer half-life, so here’s hoping Callie and Cash make a welcome return soon.