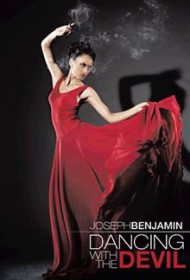 Author Joseph Benjamin delivers a story of international intrigue and suspense with his novel, Dancing with the Devil.

After an initial chapter foreshadowing the penultimate portion of the novel, Benjamin’s story begins with tough-guy Johnny Avalon traveling to Romania in search of adventure. Johnny, a retired, streetwise conman, has a secret. He is “intrigued with helping the disadvantaged.” Consequently, his search for action is limned with the desire to help the needy.

The needy in this case, however, often turn out to be beautiful women in distress, and Johnny, in true noir bad-guy-with-a-golden-heart fashion, finesses his way into beds and out of jams in the corrupt and dangerous cities of Oradea and Constanta. His luck and savvy seem proof against all predicaments until he places himself in the middle of a conflict between two mob leaders. The ensuing complication and its gradual unraveling comprise the denouement of the narrative.

Dancing with the Devil is a fast-paced novel but suffers for its lack of character development and dearth of interesting dialogue. Most of the women in the book seem to have only two roles: that of objects for Johnny’s sexual desire and admirers for his charming personality. The male characters, except for the protagonist, are also sketchy and sometimes appear as caricatures of gangland types. This isn’t surprising for a novel that is only 145 pages long; there simply isn’t enough room for full character development.

In spite of these problems and frequent typos, the author shows flashes of promise when he touches on the bedrock of what he knows. Benjamin based his book on 20 years of world travel “observing the nature of humanity in different cultures,” as he notes on the back cover. Hence, his sense of place rings true. It is this, if anything, that will hold readers’ interest in the book.