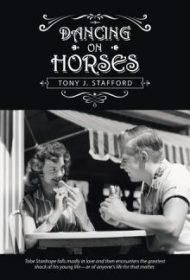 This brief, ambitious, coming-of-age novel focuses on the education and early experiences of a young man in the mid-South during the late 1940s and ’50s.

Starting in 1947, Tobe Stanhope learns about religion, philosophy, the legal system, and relationships while growing up, first in a small town in North Carolina, then at several colleges throughout the state. After numerous adventures, he finds himself in love with Anne, who is intelligent and passionate about social justice, and who seems to feel the same way about Tobe but who is unable to express it with him sexually. Tobe eventually discovers the reason, which is perhaps the ultimate challenge to his beliefs and education.

Stafford packs a lot in this short book. Each chapter begins with Tobe asking his father a deep question. His first, at 12 years old, is “what they mean by ‘bein’ saved’,” which his father, a devout Baptist, takes to mean Tobe is ready to be baptized. Tobe passively goes through with the ceremony, certain that his doubts have angered God. While in college, to impress a young woman, he impulsively decides to become a minister, even though his later readings in philosophy and literature further cement his disbelief in the truth of religion.

Tobe’s relationship with Anne is perhaps the novel’s most compelling part, and yet, once he understands Anne’s “issue,” the book seems to rush towards an ending, instead of fully exploring Anne’s situation and what it means for the couple, especially during that time-period. Also, the book describes Tobe and Anne’s attempts at sex in some detail, which might be too graphic for some readers, and the dialogue during sex, particularly on Anne’s part, can seem a little unrealistic at times.

However, an easy style and a sympathetic, if flawed, main character, as well as many philosophical and literary references, make for largely engaging reading.