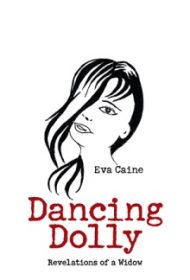 While the loss of a spouse is always a sad occasion, it may also be the beginning of a great second act. In Dancing Dolly, Eva Caine tells the fictional story of a widow on the rebound and the things she was unprepared for after her husband’s death.

When her beloved Johnny dies, Dolly struggles to adapt to life without him. Moving from the home they’d built together to a retirement village in Washington State, she feels stagnant. This leads to exploring Arizona, and the dating scene, with mixed results.

Caine writes candidly about Dolly’s sexual encounters with senior men that can be awkward and embarrassing. Dolly gets deeply hung up on one man, but the couple never seems to be in the same place emotionally when they’re actually in a room together.

In a full-length novel, this could be revelatory, but Dancing Dolly is just 25 pages long, and much of the first six chapters (out of 16) is taken up by a discussion of Dolly and Johnny building their first home and how she sold it after his death. By the time sex and dating are introduced, Dolly is still something of an enigma; thus, the ensuing situations lack the depth and character insight they might have in a longer book. Additionally, Dolly beats herself up for not sleeping with men when she’s clearly not ready, which sends a dubious message to readers.

Frank talk about aging is rare and welcome. Unfortunately, Dancing Dolly is far too brief to offer readers enough of a story to invest in. Caine might consider expanding this into at least a novella to offer some character detail and a fleshed-out plot. As presented, it’s over so quickly, we’re left to wonder about its overall purpose.