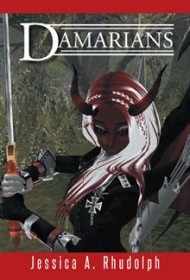 Jessica A. Rhudolph’s attention to detail is painstaking in Damarians, a brief fantasy that sketches a surprisingly complex and comprehensive history of an entire race.

Rhudolph works with a historian’s eye in describing a civilization of demons called Damarians. The creatures of this civilization are benevolent; they’re called “demons” not because of their disposition but because of their appearance. They have horns, batlike wings and long tails, similar to the common image of a devil, but they are healers who work with other creatures to preserve and protect different worlds. They inhabit a home planet called Easur, a place that features a tropical and idyllic landscape, as well as two suns and three moons.

The story focuses on several Damarians, including the healer and midwife Idrialla DragonBorn and her daughter Adewen, a child conceived during a visit to Earth. It spans several worlds (including Earth) and centuries. At the crux of the conflict is a threat to Easur. When enemies invade their planet, Idrialla and her fellow Damarians rally to save their race, their way of life and their world.

The author offers complicated family histories as well as in-depth facts about Damarians that would satisfy the most demanding anthropologist (although curiously, her references to other races and creatures sometimes lack sufficient detail). While these facts are often a strength, Rhudolph has a tendency to let her eye for detail get the best of her: Her account of the Damarians’ social structure, for example, can be dry and encyclopedic. Her shifts between present and past tenses also occasionally get in the way of a smooth story.

On the whole, though, Damarians offers plenty of compelling moments. It’s a carefully plotted tale that offers solid depth and character development. Despite its drawbacks, it’s bound to be an interesting read for any fan of immersive fantasy fiction.