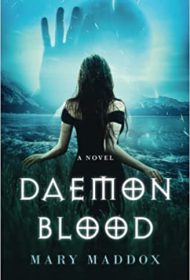 Readers learn that daemons aren’t the same as biblical demons. Unlike demons, who tempt human beings to sin and then send them to hell, daemons are spirits who inhabit people’s bodies so they can experience human emotions. It doesn’t matter which emotions; they enjoy pain as much as pleasure.

In previous installments, Lu, one of the few people who can see daemons, meets and becomes friends with Lisa. However, Lisa is being stalked by a killer who kidnaps them both. They are saved by the daemon Talion, who years later decides to have Lu mother his child through a human donor. Solomon is born with unusual powers. (All of these details take readers some time to discern.)

Now Lu has been sent to California to instruct another daemon seer, while Lisa cares for young Solly. She’s fond of the boy, but also fears his powers, which are demonstrated on a preschool bully. Meanwhile, two daemon factions, who inhabit humans to fight their battles, vie for dominance. The only way to avoid war, and inevitable Armageddon, is a sacrifice. But who will it be?

Daemon Blood is an episodic novel with conflict after conflict throughout. Maddox skillfully ties them all together. Talion, her amoral villain/antihero, is unique and interesting: a psychic vampire who sucks the spirits and humanity out of his victims, not because he’s evil, but because of his nature. Lu and Lisa are strong, believable women characters, roles uncommon in supernatural horror novels.

The story can be confusing, however, as chapters generally alternate between Lisa’s and Lu’s viewpoints, and the two friends are enough alike that it takes a page or two to determine who’s telling the story in each chapter.

Despite this, Daemon Blood is recommended for those addicted to the horror genre. However, the novel will be much more satisfying for those who have previously read the first two installments.