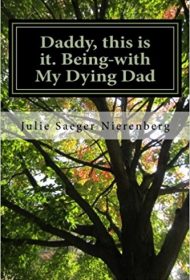 It’s not often that we think of the death of a loved one – or our own mortality – as something to celebrate. But in this memoir about her father’s death, Julie Saeger Nierenberg offers lessons about the end of life that everyone can learn from.

Armin Louis Saeger, Jr. died of cancer in 2012. In these pages, Nierenberg discusses the closing of his life and how he and his family approached it. The book, the author writes, “was motivated by my belief in the possibility of a beautiful, peaceful and fulfilling death, as informed by my own experience with my dad.”

The story she tells isn’t maudlin, nor does she drag it out for dramatic effect. She tenderly recounts his slow fade, especially the last week or so of his life. More than a dozen family members came to the skilled nursing center where he lay to say their goodbyes. They talked with Armin, laughed together, sang, and cried.

But perhaps the most remarkable aspect of those final days was her father’s approach to his impending departure. The former social worker, civil rights activist and writer counseled each family member individually, telling them of his never-ending love for them, giving them encouragement and saying everything that he believed needed to be said.

Nierenberg is a solid writer who doesn’t rely on sentiment to grab the reader. Her story, told straightforwardly, carries enough weight on its own. Making the book even more relevant, the last 25 pages are devoted to resources and advice, whether you’re a family member seeking information about a positive transition at death, or a person considering your own eventual passing and what can be done now to prepare.

This is a useful book. Death will touch us all, and it’s never easy. But Nierenberg – and her father – have shown us how to lessen the pain and turn one’s passing into an experience we need not fear.