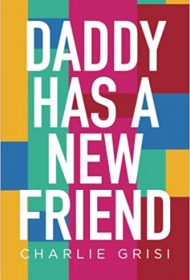 In Daddy Has a New Friend, novelist Charlie Grisi pulls the curtains back on the human drama and legal strategies underlying a divorce.

After 22 years of marriage and three children ranging in ages from 9 to 13, 46-year-old part-time nurse Lily Poulos is surprised to learn her husband, 55-year-old construction firm owner Nick, is having an ongoing affair with Doreen, a 24-year-old waitress and college student. After a failed attempt at marital counseling, Lily hires Atticus Reynolds, a respected family law attorney “not afraid to break a few eggs to make an omelet,” while Nick turns to a general practitioner attorney with little experience in divorce matters. Whether they will achieve an amicable and equitable dissolution depends on lawyering tactics and continuing complications arising from each party’s behavior.

Grisi writes well, occasionally interjecting colorful one-liners, and creates interesting characters who provide their perspectives on events. Although Nick remains the stereotypical middle-aged male obsessed with projecting a youthful appearance and having a girlfriend who makes him feel young again, Lily and Doreen are more complex. Both are sympathetic, though Lily isn’t as innocent as she appears and Doreen not as villainous, despite her agreeing to an affair with a married man.

Reynolds embodies the legal wisdom of his namesake, the lawyer hero of To Kill a Mockingbird. Erudite but personable, Reynolds knows his way around a courtroom and the complexities of human relationships, opining, “in a good marriage, love is the glue. In a rough divorce, hate is the cement.”

Grisi, a retired divorce attorney, does an outstanding job explaining legal strategies through his characters, but spends too much time doing so. Passages extend for pages concerning divorce tactics as well as legal matters unrelated to the case. More editing is necessary to cut unnecessary passages to shape a narrative that sustains excitement.

Despite a need for substantial trimming, the story offers an insightful look at the ways divorce impacts a couple and their families.