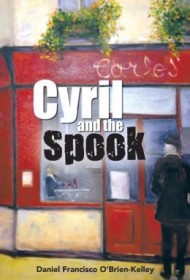 In Cyril and the Spook, Daniel Francisco O’Brien-Kelly sets forth a series of musings couched in the form of dialogues between the main character, a retired intelligence agent (the spook), and his emeritus professor friend, Cyril.

The dialogues cover a broad spectrum of topics and are more in the line of setting forth a perspective than of presenting a persuasive dialectic. It is as though the author were trying to locate himself in the longitude and latitude of the sum of his experiences. Many of the dialogues are humorous, such as those exploring football, and gamesmanship, and the King’s English. Others are wry and sometimes bitter, taking on the corruption of governments and the effects of rampant capitalism.

Although the dialogues have some interesting moments, such as the author’s send-off of automated phone systems and incompetent customer service representatives, most of the conversations in the book are simply not sharp enough to hold the reader’s attention. They represent everyday observations and lack the insights that would cause the reader to reflect and turn the page. Commentaries on the avariciousness of shoppers and the boorishness of tourists, for instance, are too commonplace to generate that “aha” feeling that readers of this type of genre would pursue.

Part of the problem is that the descriptions in the work are so sparse that the dialogues must stand on their own. A better evocation of scene and character would help the book immensely.

A good copyeditor would also be beneficial, as the author seems confused regarding quotation demarcation and the use of capitals. Consequently, although Cyril and the Spook shows some promise, the book requires a rewrite and some editing before the author can expect it to garner a wide audience.