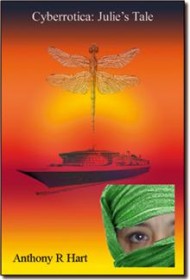 In Anthony R. Hart’s novel, Julie, a well-educated young woman from the United Kingdom, enjoys a dream life until tragedy strikes when her fiance dies. Distraught, she avoids family and friends, instead seeking solace through anonymous faces in a computer chat room. She becomes fascinated by John, an online gentleman who makes what she considers a fantastic offer of work as an executive hostess at exotic locales.

Julie jumps at the chance, initially believing she has stumbled upon the career of a lifetime. However, after transfer to Bangkok, she quickly finds herself trapped within an insidious sex ring. Julie and many other kidnapped women are forced to service the malicious sexual desires of the world’s rich and powerful, who gather for secret dalliances and lucrative business dealings. Julie becomes a prisoner and sees little hope of escape.

Hart’s novel explores the perfidious dangers of cyber-world criminals who prey upon even those who believe they are too smart to be duped. The plot is fairly well developed from beginning to end; however, at times it bogs down with unnecessary plane flight details and breakfast chatter that fails to move the story forward. (“Do you want any toast?” “Yes, please, two slices. I will get the drinks for us. What would you like to drink, Julie?” “Tea please, Adam.”) In addition, the characters are thinly drawn despite the dramatic theme. Caution: sexual brutality against Julie is graphically described in places, but rather than gratuitous, the details seem necessary in making clear the horrifying extent of the organization’s callousness.

Cyberrotica is a tale generally well-told, and the book reaches a credible conclusion. While better pacing, richer character details and stronger literary polish could pump more life into the novel, it satisfies as an interesting beach read.