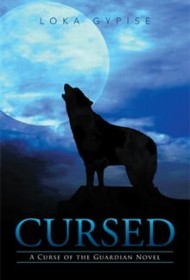 Likely inspired by the Twilight book and movie series, Cursed is a vampire-themed novel with a love triangle at its heart.

The romance revolves around Delina (royal guard for the wolves), Jericho (prince of the wolves), and Vladimir (prince of the vampires). Delina, who has combat skills, and her brother Xavier, with his computer hacking skills, protect the royal wolf siblings, Jericho and Jenny. Romances develop between Delina and Jericho and Xavier and Jenny, until Vladimir, who mistakes Delina for a vampire, falls in love with her after meeting her at a bar.

During a battle between wolves and vampires, Vladimir unknowingly bites Delina while she’s in wolf form. Because of her secret heritage and unfortunate curse, she undergoes unexpected changes in her body and life. Throughout this ordeal, she also becomes pregnant twice, with each child having a different father.

While such Twilight-type scenarios have a clear fan base, problems with content and style make this book a difficult read. There’s little character or story development, and characters, such as Delina’s parents and a young woman obsessed with Delina, appear with minimal introduction and explanation. Alternating narrators and a disproportionately large amount of dialogue, nearly all of which contains non-standard English, grammatical mistakes, and typographical errors, make some of the book incomprehensible. Consider this from page 20: “‘No you should I through before you did what you did’ David said. (That supposed to vague it is more 2nd book).” Missing and incorrect punctuation present ongoing problems: “I heard the door open, [sic] I hid behind. [sic} The couch, [sic] the person came into the lounge.”

The book’s many flaws will likely dissuade readers from embracing this vampire/wolf offering, apparently intended as the first in a series. Aggressive editing could improve the book’s chances with young adult readers of romantic fantasy.