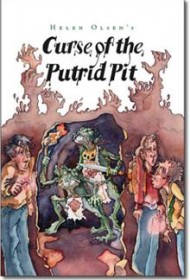 In Helen Olsen’s young adult fantasy novel, Junior is new to scouting and gets off to a bad start by lying to his fellow campers when they’re mean to him. His scout leader, Wild Bill, hooks the boys into a story that offers a moral tied to Junior’s dilemma, teaching the value of the truth, but also keeping the bullies in check.

Author Helen Olsen splices her Curse of the Putrid Pit together, alternating chapters told from Junior’s point of view with the tale Wild Bill is spinning as they hike and the boys face down wild animals and pranksters from the girls’ camp. The transitions flow smoothly, and kids will feel rewarded when they make the connection between the two. The writing is clear, and if the story-within-a-story gets a little overstuffed with details (including a talking, reading cat who wears kitty pince-nez), they are well-rendered on the page and fun to read.

Junior’s love of bending the truth initially blinds him to the consequences suffered by Fannie Fibber in Wild Bill’s story; he doesn’t connect her lies to his own, or see how they can be hurtful. Fannie is forced to wear a lovely necklace that changes whenever she’s dishonest, weighing her down, choking her or otherwise forcing her to recant and tell the truth. By story’s end, though, Junior has tried to make amends and inroads toward friendship with the people he has wronged.

Olsen thanks several manuscript readers and editors for their help, and their efforts succeed; the book is well-written and free of the loose ends that amateurs so often overlook. There’s a very subtle Christian message here that doesn’t stand in the way of non-religious reader enjoyment. Olsen has written a fine, fun story that educates and entertains. Curse deserves to find an enthusiastic audience.