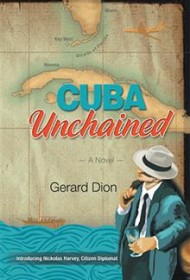 Cuba Unchained, a debut thriller by former Marine Gerard Dion, features an intellectual action hero à la James Bond who is working to “free the Cuban people” through his charitable organization, Americans for Reconciliation with Cuba.

Nickolas Harvey is a semi-retired businessman with a passion for the plight of America’s Cuban neighbors. As the novel opens, he moves from San Diego to Washington, D.C. to become ARC chairman. He frequently visits Havana and the White House to meet with officials and tries to drum up layman support. However, many oppose his vision of open diplomacy with Cuba, and he faces security threats from unknown parties on both sides. Meanwhile, a group of desperate Cubans are planning an ill-fated voyage to Florida on a fisherman’s boat, allowing the author to showcase a lifestyle far removed from the wealthy politicians and entrepreneurs.

The narrative has a few flaws to note: Long blocks are composed of dialogue and speeches; one sometimes wishes for more expository prose. There are so many characters and organizations that it can be hard to keep them straight. And while the author is well informed and sensitive to the nuances of American-Cuban relations, he makes an unfortunate gaffe in writing that “Nickolas couldn’t read Cuban.” In addition, the subplot concerning the would-be immigrants ends abruptly, in a way that makes them nothing more than an object lesson.

Still, such issues are minor overall and barely diminish one’s enjoyment of this light-hearted thriller. The action scenes, which include Bond-like high-speed car chases and hand-to-hand combat, provide campy fun (as in: “the Lexus … lifted the two shooters off their bike and spun them into the hereafter”). An assassination attempt on Raul and Fidel Castro is a particular highlight, blending real-life characters with a plausible fictional scenario.

Although the recent opening of diplomatic relations with Cuba renders this book somewhat outdated, fans of James Bond spin-off stories should enjoy this as a fast-paced thriller.