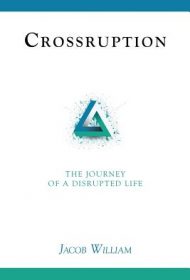 A recent study by Pew Research found that one-quarter of Americans describe themselves as “spiritual but not religious.” Jacob William’s Crossruption presents an interpretation of the Christian message for this slice of the population.

For William, a truly biblical Christianity is not about doing but being. He criticizes the existing churches as commercial enterprises selling a product called “God” that attempts to meet the needs of religious “customers.” In William’s critique, Christian churches are selling tickets to a paradise in the future rather than focusing on who Christians should be in the present, i.e., children of God who are present to the source of all creation on a moment-to-moment basis.

The author proposes an alternative interpretation of Christianity that sees Christ as a figure who broke through from the spiritual realm to our fallen world, and who represents the opportunity to live a truly spiritual life in body, mind and spirit. William believes that communion with God through prayerful contemplation, study of the Bible and by connecting with Him in the present moment, will lead to a genuine, transformative relationship with the Deity.

William is a businessman who models his work on how such companies as Apple and Uber disrupted the music and taxicab industries. He offers Christians a “Crossrupution”—a reading of the bible that disrupts existing religious teaching. He uses jargon from business such as “key Indicators” and “metrics” to discuss spiritual matters, an unusual but refreshing way to approach texts millennia old.

Unfortunately, the structure of the book—why topic X follows from topic Y—is occasionally unclear, but William makes a passionate and articulate case for his disruptive approach to the Gospel message. Those who describe themselves as “spiritual but not religious,” especially if they come from a Christian background, will welcome this readable, non-dogmatic treatise.