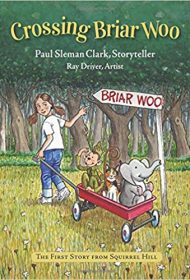 In Paul Sleman Clark’s first children’s chapter book in a series, a young girl sets out with her animal friends to find North Africa.

Madison, who lives in Squirrel Hill, is certain that on the other side of nearby Briar Woo lies North Africa. Her travel companions include Kitty, a cat; Monk-Monk, a monkey (it’s unclear if he’s real or a stuffed animal) and Ellie, a stuffed elephant. When they reach the edge of the dark, forested Woo, Ellie asks Madison why they are taking this trip. Madison responds: “We are not as small and young as we used to be…I know North Africa must be on the other side and I want to see it for myself.” To entice her friends, she suggests there might be a bounty of fruit and rivers of cream awaiting them.

The foursome encounter mild dangers in the Woo. After a falling tree nearly kills them, Madison scolds the responsible beaver and asks for directions to North Africa. Ignorant of its location and desiring to get rid of the “difficult” Madison, the beaver makes up his directions. Following his instructions, the group eventually finds that they’ve been directed, not to North Africa, but back home!

Each character is distinct, with gentle charms that recall the animals in Winnie the Pooh. Young readers will cheer for brave Ellie when he confronts his fear of water, twice crossing a creek. Also, Ray Driver’s black and white illustrations, including a two-page map detailing Squirrel Hill, are delightful.

That said, one wishes the story had more impact. While tales about journeys often serve as metaphors for life—What makes the trip worthwhile? How do struggles make us stronger? –this opportunity feels squandered. The characters reach no epiphanies and learn no lessons. When they wind up back home, the ending feels anticlimactic.

One hopes book two will provide a stronger sense of purpose and a gratifying conclusion, as Clark’s imagined world is filled with charm and endearing characters readers will enjoy following.