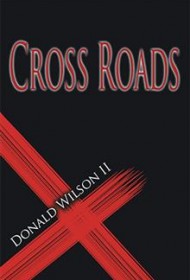 Donald Wilson II’s approach to action, adventure and supernatural elements is straightforward in Cross Roads, a promising debut that succeeds in part for its clear-cut style and direct descriptions. This story of an unlikely hero and her epic battle against a supernatural enemy will be familiar to any devotee of the science fiction, horror and fantasy genres. However, Wilson’s earnest prose and polished style make the tale’s recognizable themes and plot conventions feel fresh.

Wilson’s narrative form relies heavily on high action and high fantasy. In the space of a short introductory chapter set in a small town in Bolivia, he offers car chases, rugged heroes, assassinations and nasty monsters bent on murder. Readers quickly gain context for all this liveliness with the introduction of the novel’s protagonist, Shawna, a homeless teen living on the streets of New York with her companion, Javon.

Her hand-to-mouth existence transforms suddenly and dramatically after an assault by supernatural enemies with glowing red eyes and fatal intentions. She’s rescued by Decker, a tough, caring character who offers the all-important explanations that drive the rest of the book.

The baddies are monsters known as the Doma clan; Decker is an Acolyte, an order dedicated to stamping out the clan’s threat. Shawna soon joins the Acolytes’ ranks, relocating to Colorado and training for the epic battle to come.

The premise echoes canonical fantasy works ranging from Star Wars to The Hobbit, in which an improbable hero must engage in battle, with the fate of humanity hanging in the balance. Happily, Wilson maintains his singular style, with an excellent vocabulary and spot-on descriptions throughout the book, and that voice makes all the difference. Thanks also to copious action scenes and vivid characters, the author makes the premise his own.

Even at its familiar moments, Cross Roads will be a treat for fans of genres ranging from spy thrillers to horror-based fantasy.