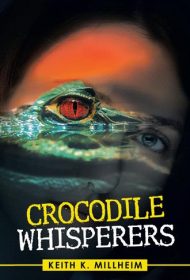 Crocodile Whisperers is the second book in Keith K. Millheim’s Game of the World fantasy series (following The Blue Ring Assassin). Set predominantly in 1980’s Australia, the story centers on the mystical conflict between an aboriginal group and dark forces aligned against them.

Initially, the novel focuses on the continuing adventures of marine biologist/killer-with-a-conscience Zoe Waringi. Zoe is tasked with assassinating a Japanese yakuza for assassin’s guild Der Finder. However, due to a mystical intervention gone awry, Zoe becomes attracted to the man she’s contracted to terminate and refuses to complete the job. Der Finder subsequently sends its most able killer to terminate Zoe.

Following a break in Zoe’s story, the novel turns to environmentalist filmmaker Beth Kline who travels to Australia in the employ of shady capitalist Connley, to direct a National Geographic segment about her godfather, aboriginal conservationist Bill Gidgiwarra. There, Beth displays a unique ability to communicate with the crocodiles in Bill’s care and agrees to work with Bill, a dream-traveller who communicates with an ancient crocodile named the Great One.

Subsequently, Beth is drawn into a provincial conflict between Bill and Connley, due to Connley’s unsavory plans for the Great One and the town where Bill resides.

Millheim avoids gender stereotypes by portraying Zoe and Beth as complex, relatable characters with agency. The novel’s vast gallery of supporting players is equally memorable and the dialogue witty.

Structurally, the novel falters at first. Zoe and Beth’s early independent exploits create a disconnected read until their stories eventually intersect. When this happens, however, the author weaves the stories into a tightly plotted, intriguing whole.

Crocodile Whisperers is an entertaining fantasy that spotlights an oft-overlooked people and their cultural heritage while also providing an action-packed thriller that genre fans will enjoy.