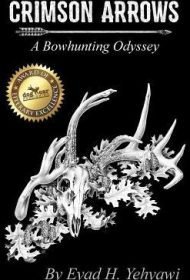 In high school, Eyad H. Yehyawi was introduced to bowhunting at a hunters’ education program. Thus began a nearly 30-year passion that has taken him around the world— adventures he used to regale his two young sons with after the requisite bedtime stories. Now, he has put his exploits to paper in Crimson Arrows: A Bowhunting Odyssey.

Yehyawi has chased game big and small, from bison and musk ox to grouse. Much of his hunting is local, in the fields of his native Iowa. But he’s taken trips to Canada, Africa and north of the Arctic Circle. While his stories follow a pattern—he scopes out terrain, stalks his prey, then makes his kill—the author’s writing skills elevate the narrative.

For example, he writes eloquently of spotting a bull moose he later felled in what would become the highlight of his hunting career. As the bull bedded down on a steep slope, “I noticed a trio of spruce trees near his sanctuary. Surrounded by a sea of yellow, they stood isolated and alone, as if hostages of the aspens and willows… [To reach the moose] we would have to cross a creek, climb a pair of hillsides that would make a mountain goat cringe, and then maneuver through the tangled maze within which the bull was bedded. It was crazy to consider, but within minutes I had my bow in hand, and we were headed into higher country.”

Yehyawi’s attention to detail engages readers, and the book is well-edited, with technical language and hunting jargon kept to a minimum. More than 130 color photos nicely illustrate the text.

Bowhunters especially will enjoy the stories here, as will the author’s sons, who have been given a family keepsake—and lessons in life as well. “[T]o succeed, one needs a solid foundation built upon hard work, humility, and perseverance,” Yehyawi writes. “I’m proud to say that bowhunting played a major role in that mindset…”