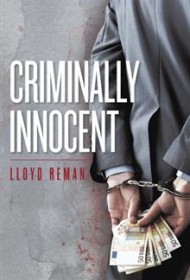 Criminally Innocent is Lloyd Reman’s self-described “financial thriller.” But while it involves corporate finance, the novel isn’t a thriller in conventional terms, though it has much to recommend it.

Kavi Chander, one of a close group of friends and the CFO of one of the world’s biggest corporations, becomes ensnarled in a financial scandal even though he’s innocent. A subsidiary of his company, ADG, has been bribing officials in foreign countries to build power plants. Now, Chander’s career is in jeopardy as he faces criminal charges. His three longtime pals help him – and one of them, main protagonist Carl Messina, volunteers to break the law to do it.

If you’re not familiar with the way multinational corporations work and the jargon of the financial world, the narrative can drag at first. This is not a book where bloody corpses and fist fights drive the storyline. Unlike “Bourne”-style thrillers, there’s no violence.

What you get, after you settle into Reman’s rhythm, is a likable story about people and the human interactions that bond these friends — as well as Messina’s fussy Italian mom and his mysterious and reluctant love interest (who has only a tangential role in the plot but a large one in Messina’s psyche) — together. Messina’s sections are told in the first person, while the rest of the book is in third person, which also takes some getting used to.

Much of the narrative, which is grammatically clean and well edited, consists of rapid-fire dialogue that reflects the friends’ closeness and the back-and-forth of the legal proceedings. There isn’t much in the way of descriptive passages or artful literary writing.

Ultimately, the story leaves readers wondering about deeper motivations. We don’t understand why Chander ultimately decides to react the way he does, and readers may question if someone like Messina would break the law to help a friend.

Nonetheless, Criminally Innocent is an engaging read that will hook most readers until its satisfying conclusion.