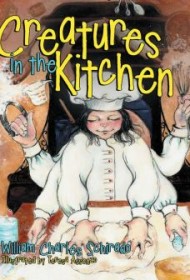 When it comes to food, children often limit themselves to standbys such as chicken fingers and French fries. William Charles Schirado introduces a much wider culinary world in his entertaining picture book Creatures in the Kitchen.

Schirado tells his tale in rhyming verse. Initially, the story revolves around creatures living in a land where food is not appreciated. They strike out on their own and show a giddy joy as they indulge themselves, not just in eating but in the process of growing and preparing food.

After the first chapter, that storyline is dropped and the focus shifts to food and cooking, including discussions of cooking techniques, cuisine from different countries, how cooking involves the senses, and the particular joys of culinary creation (as in: “When you’re in the kitchen,/don’t confuse dirt with mess./In the kitchen you need/a bit more mess than less”).

The book is divided into five chapters: “Appetizer,” “Soup to Nuts,” “Salad,” “Entree,” and “Dessert.” While the conceit is clever, the text in each chapter doesn’t really relate to the titles, which can be disorienting. (“Entrée” begins by talking about how whisky and beer are made, rather than discussing main dishes; “Salad” focuses on seasoning techniques.)

Creatures in the Kitchen features delightful, whimsical illustrations and is written with contagious exuberance. Occasionally, though, Schirado stretches for a rhyme, creating awkward constructions (“We cook and we heat,/moving water around,/so our food is just right/in its sight, feel, and sound”). And sometimes the narrative loses focus (the chapter that begins discussing spices later includes puzzling, unrelated details about water). Parents should also note that the book’s many challenging words (including culinary terms) will require their guiding hand.

Careful pruning of awkward stanzas and passages that wander off topic would improve Creatures in the Kitchen. But there’s plenty of fun to be had here, nonetheless. Energetic and engaging, even when going astray, the book will likely spark the culinary curiosity of young readers — and their parents.