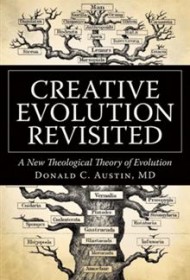 In Creative Evolution Revisited, Donald C. Austin, a third-generation doctor, attempts to revive the ideas of French philosopher Henri Bergson (1859-1941), whose concept of Ã©lan vital (creative life source) was a response to the atheistic evolution theory of Charles Darwin.

Austin reviews the history of theistic evolution and discusses the concepts of mutation, moral values and theological beliefs as they relate to evolution and Bergson’s theory of “creative evolution.” Much of the book consists of lengthy quotations from scientific authorities representing various positions in the creation-evolution discussion.

Austin concludes that “the exotic dark matter [of the universe] is the creative force in our universe.” Since the created universe contains evil, however, this vital force is not synonymous with God: “I separate God from the universe, except at its origin in the big bang. Thereafter, an outflow of God’s creation is the ‘elan vital’ or creative urge, which by creative evolution continually battles the Spirit of Evil with the Spirit of Good.” Thus, Austin views creation in spiritual and moral terms rather than simply in a materialistic way.

With such heady subject matter, the book is not easy reading, and several features of Creative Evolution Revisited compound an already difficult topic. For some reason, the author chose to set the entire book in capital letters, which is readable but not particularly inviting. An unusual system of notes and end material also is hard to follow. And the last 230 pages are addenda, much of which might have been incorporated into the body of the book to simplify the presentation.

Despite its blemishes, for those interested in following the ongoing creation-evolution debate, including the recent focus on intelligent design, Creative Evolution Revisited contains a wealth of material.