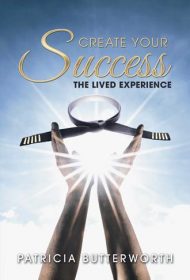 In Create Your Success: The Lived Experience, Patricia Butterworth tells her story of personal growth through the counterculture of the 1960s and 70s, and on through her embracing of New Age practices and intensive martial arts training.

Butterworth quickly describes her Catholic childhood in Sydney, Australia, before diving into her hippie years. American readers may be surprised to learn of her account of protesting the Vietnam war at age 21, which paralleled the anti-war movement in the US. Married and quickly pregnant, she and her new husband nevertheless travelled the world before establishing their family.

After her travels, Butterworth notes, “something stirred in my memory and I searched for a place to learn transcendental meditation.” She began attending yoga classes and was soon enticed by New Age spiritual teachings.

Then, introduced to Hapkido, a martial art founded in Korea, she found a focus that would sustain her for more than 30 years. She details her journey to becoming a Hapkido Master, along the way intertwining the narrative with discussions of physical challenges and spiritual seeking, as well as family achievements and upheavals, including her divorce.

Butterworth’s story is compelling. She’s honest about the limits of New Age thinking, describing attempts at spiritual healing that failed and even noting when frustration led her to pause for a while before resuming Hapkido and other esoteric practices.

The book also has a few drawbacks: While the title implies a self-help guide, this is Butterworth’s memoir. General readers could tire of the many details about Hapkido. And some might find it hard to relate to an author who can afford to spend $5,000 on one retreat, among other expenses.

Nonetheless, Butterworth is a sincere, engaging writer. Her story is closely observed and admirably candid. While the author indicates that the book is intended largely for family, her journey might also provide inspiration for others seeking fulfillment in their lives.