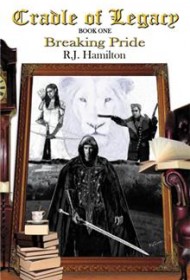 Cradle of Legacy is a heroic fantasy novel revolving around a half-breed elf’s quest to save the elven race from obliteration.

Val’Lorien is a fascinating, singularly unique protagonist. Having lived in the great elf city of Cara’Del his entire life, Val is not only the only “non-elf”  in the entire kingdom, he is also the only Dream-weaver to ever set foot in the elven lands.  His ability to magically manifest matter is astonishing. But he has learned everything he can from his elven teachers, and the “dull tedium” of living with the virtually immortal elves is slowly driving him mad.

Things change when his elders reveal to Val jaw-dropping revelations about his parents (whom he never knew) and ask him to essentially save the elven race by leaving the safety of home, spanning the void of the barrier surrounding the kingdom, and embarking on a perilous quest to retrieve an invaluable stone. He agrees—and sets off on an adventure that will make him a legend.

While the novel is tonally comparable to classic works by Fritz Leiber and Michael Moorcock, it suffers from a bloated and lethargic feel.  Because the author is so focused on meticulous description throughout (he uses more than a page to describe a character’s appearance, for example ), the narrative flow suffers greatly, detracting from the overall reading experience. Some of the fight scenes are so drawn out that they become boring, and the repeated quasi-scientific explanations describing magic use quickly become tiresome. An abundance of minor grammatical errors also prove distracting.

Still, the character development and world building are strong, and the story features some intriguing plot points. At its core, this is an entertaining story that serves as an epic adventure as well as an intimate tale of one man’s journey of self-discovery. Readers who can get around the unhurried pace and bloated narrative will find some rewards in these pages.