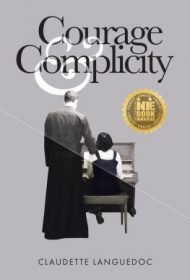 In this compelling novel, a woman reflects on her early years teaching at a school for “Indians” in the 1940s and the harm wrought even with the best of intentions.

When a package arrives in 2006, Mary Brock knows instantly it contains the journals of Brother Thomas, a man who managed the farm at Bear Lake Indian Residential School where Brock taught years ago. After reading the letter from his attorney explaining that Brother Thomas is dead, she packs the journals away—until a visit from her granddaughter and an indigenous friend from the Northern Ontario community where Brock taught moves her to finally read the writing. Journal entries are interspersed throughout as Brock then recounts her days at the school.

At 21, Brock accepts a position at the school, hopeful that having had a good life, she can give something back. She also believes, as was common, “… if we couldn’t make the Indians white, we could at least prepare them for a life in the white world.”

She soon gets a reality check as she witnesses the abuse the children withstand, including physical punishment for speaking their native language and being forced to stand in front of everyone wrapped in a soiled sheet for bedwetting. That’s hardly the worst of it. But she also finds the good in people and renders positive changes before departing after just one school year.

Languedoc delivers a thoughtful look at the mistreatment of indigenous people and the prejudice that inspired it. Skillfully written, her story strikes just the right tone in relating the abuses: Brock isn’t overly emotional, but clear-eyed in the grim reality she faces daily. The characters are flawed, but also victims of the era’s prevailing ideas, and the journal entries provide an interesting change in viewpoint that reveals more about Brock than she might have personally related.

Such strengths result in a well-told story about a troubling, thought-provoking chapter in Canadian history—one readers will appreciate.