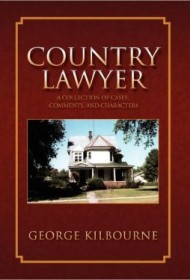 In Country Lawyer, author George Kilbourne remembers his six years of legal practice at the firm of Hays & Hays in the small town of Sullivan, Indiana. The result is a collection of interesting and sometimes funny stories.

Kilbourne had been an attorney in California, but after travelling through Sullivan to visit a relative, he decided to stay. His odd initiation into the Sullivan way of law came when he watched his senior partner, Hinkle Hays, meet with a state Supreme Court justice behind closed doors, where Hays apparently told the justice he was unhappy with a trial court decision that had been reversed on appeal. After the talk, the Supreme Court reinstated the trial court’s initial decision. Kilbourne swallowed hard and decided it was best to keep quiet and move along.

At Hinkle’s funeral, a lawyer told of pacing the court hallway waiting on a jury verdict, when Hinkle asked if he wanted to know what was going on. Hinkle led the lawyer into a closet that had a keyhole – so jurors could be seen and heard. The attorney watched until someone insistently tapped him on the shoulder. Turning around, he saw the trial judge waiting on his turn at the peephole.

Kilbourne hadn’t seen legal shenanigans like this before, but he navigated the strange customs and made important contributions to Sullivan, while learning much about small town politics and justice. He finally decided he couldn’t overcome being the out-of-town guy and moved back to California.

While the author’s stories are compelling, readers may feel uneasy because so much is left out. We’re never told about the author’s family and personal life, the years when all this happened, or what drew him to Sullivan. More context and facts would have lent a solid anchor to these promising but underdeveloped stories.