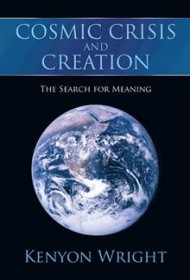 According to Kenyon Wright, a retired Episcopalian clergyman, former chair of the Scottish Constitutional Convention and author of Cosmic Crisis and Creation, climate change, overpopulation, war, rapid technological developments, and increasing poverty are endangering the lives of every creature on this planet. Is there hope? Yes. “Properly understood,” he contends, “the Christian concept of Creation and of human relationships based on God’s Covenant, offer…the most realistic Hope for the future.”

The author has drafted an informative, emboldened call to action for unity in matters of reason and faith. Science is about facts, he makes clear, religion is about significance behind the facts; our problems today come mostly from a lack of meaning behind advances in technology. Instead of the world looking at these two approaches to human understanding as diametrically opposed and mutually exclusive, Wright argues that their unification is necessary for the survival of future generations.

Wright’s book is a fast, but important read. It serves as a fine introduction to the pattern of economic growth known as sustained development, which champions the fulfillment of the needs of the current generation without damaging future generations. His statistics are alarming (he notes that we live in a time when such things as population and poverty rates don’t increase by degrees but exponentially, citing that by 2050, the world population, currently at 6 billion could reach 12 billion.)

Yet, while our present state many seem grim, Wright never falls into melodramatic pessimism. His message is optimistic. He believes wholeheartedly that the Christian faith can make all things new again and that “we must look to those who think creatively, and who express truth not just in scientific or intellectual terms, but with imagination. For a new vision, we must look to the visionaries.” While atheists, agnostics, and non-Christians may argue against Wright’s vision, it’s hard to dispute that our current thinking about our planet and future generations needs to change now.