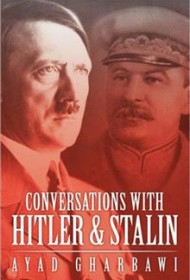 The Iraqi-born author of this peculiar, intermittently compelling volume, a “writer, painter and poet” educated at Tufts University in Boston, has a profound interest in the bloody fantasies of Adolf Hitler and Joseph Stalin. His fiction takes the form of a series of imagined interviews with the two dictators conducted by an inquisitor called “X.”

Is this some sort of post-postmodernist literary game freighted with cool irony? Unfortunately, Ayad Gharbawi, who’s now living in Damascus, Syria, doesn’t have that kind of skill. Neither does his alter ego, X. Although the character challenges the Fuhrer and Uncle Joe about their savage misdeeds, all too often X displays little moral outrage. Sample: “If I am wrong, Heir Hitler, please do correct me.” In addition, Gharbawi says “Thank you” to the brutes with disconcerting frequency.

The book’s novelty lies, of course, in the conceit that the two mass murderers are still with us and willing to talk, even if that produces only mendacity and self-delusion on their parts. (Hitler: “Morals are not the same everywhere. And they are not meant to be sanctified everywhere.”) The approach falls apart several ways, not least because it is biologically impossible. For Stalin to assess the current performance of Vladimir Putin, he would be more than 130 years old — tough duty even for a Man of Steel. Earlier, Hitler weighs in on Somalia, circa 1992. Little matter that he must be over 100.

Gharbawi says the purpose of his “novel” is “to understand the minds and motivations of Hitler and Stalin.” Although there are moments of historical insight, other historians and moral theorists have done far better without resorting to similar tricks.