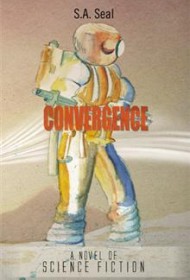 Imagine you’re an American boy growing up in the 1960s. What do you want to be when you grow up? Chances are that “astronaut” makes the short list, as your country prepares for the first moon landing. Space travel was likely a dream for Convergence author S.A. Seal, one he has realized in casting Tomas Companion as the first man to land on Mars.

Tomas is a witty, self-deprecating American pilot, bored with his work and alienated from his wife, until a series of events – a convergence – turns his fortunes around. Seal lets Tomas tell the story, in a voice that is equal parts scientific authority and class clown. While training for his Mars mission, for instance, Tomas gets instructions from a major who sounds like actor John Cleese; his elaborate speech on spacesuit specifications morphs into a Monty Python skit and has the reader laughing along with Tomas.

Traveling in a souped-up space shuttle, his every move delivered to a captivated reality TV audience, Tomas never expects to make it to Mars, let alone survive on its surface. He’s no John Carter, the uber-hero author Edgar Rice Burroughs sent to the red planet a century ago. Instead, he’s totally human, drinking Jack Daniel’s and singing Cheap Trick tunes. Readers identify with him and cheer him on as he hurtles toward what appears to be certain death.

A few inconsistencies mar the otherwise fluid writing. For instance, Seal takes pains to explain the aquamarine color of the spacesuits early on – better video contrast against a red landscape – but later describes them as sapphire blue. Such details and some unfortunate spelling errors – “pealed eggs,” for one – distract from an otherwise compelling, fast-paced adventure.

If you ever dreamed of traveling to distant planets as a child, here is your chance to go along for the thrilling ride. Seal leaves his tale open-ended, suggesting sequels to come.