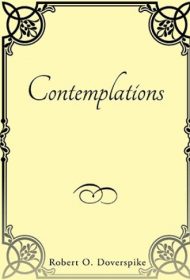 Robert O. Doverspike’s book, Contemplations, is a mixture of biographical material and essays concerning his and, by extension, everyman’s, relationship to the world.

“It is clear that the end of my life is drawing near,” he states near the beginning of the book, and “It is time for me to finish up my musings and send them out into the world.” In these reflections, he preserves some of “the idiosyncratic personal world each individual creates,” which is lost for most when they die.

Doverspike’s autographical material is spare. Among the details he covers are his birth date (1923) and service as a topographical draftsman for the “Fifth Corps of Marines” in WWII, his metallurgical engineering education at Stanford, work in the aerospace industry, marriage and retirement life in Arizona, development of prostate cancer and Parkinson’s Disease. His approach is stoic and matter of fact. “Death awaits us all,” he writes. “Learn to Live with it.”

The essays deal mostly with abstract material. Topics discussed include the mind/body dichotomy, determinism versus free will, “the development of numbering systems and complex tools of measurement,” chaos theory, particle physics, Heisenberg’s Uncertainty Principle, the history of language and the uses of religion.

Portions of Doverspike’s writing assume that reader has, as he does, a broad knowledge of history and philosophy, so he doesn’t need to explain, for instance, what he means when he indicates that Paul of Tarsus was one of the earlier subverters of Christianity. The effect is of an armchair talk between one friend and another—stimulating for those possessing similar fields of knowledge, but likely frustrating for others.

Contemplations also suffers from repetition. Essays 9 and 10 begin with the exact same paragraph, and his contention that each of us lives within our own, unverifiable, reality is reiterated throughout the book.

Despite these issues, Contemplations will attract some for its energetic play of ideas and intriguing depiction of one man’s construct of reality.