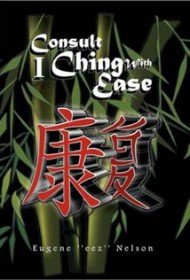 The I Ching (pronounced ee-jing) is one of mankind’s oldest written documents, believed to date back more than 3,000 years in China and originally considered to be a “Heavenly Book.” Because it began as symbols and has often been re-interpreted over the centuries, Westerners frequently find its concepts confusing, especially if they don’t study it with a qualified teacher or scholar.

This posthumous publication by the late Eugene Nelson, a lifelong practitioner of I Ching, offers a short, simplified interpretation of the I Ching for beginners. He explains how to build a personal hexagon, the symbol upon which the I Ching is based, through repeated coin tosses. (The side the coin lands on, heads or tails, indicates whether to use a straight or broken line in the hexagram.) Once the symbol is completed, readers can learn how to interpret it by locating the page that contains a matching hexagon and reading the lifestyle guidance offered, such as: “simplify your life,” “do not take risks at this time,” or “avoid extremes.” These are accompanied by suggestions for implementation.

The I Ching’s longevity attests to its relevance in human conduct, and Nelson’s attempt to offer a simplified version is laudable. Unfortunately, the book has some copyediting issues (for example, page 15 notes that a chart of hexagrams will follow in the next pages, but those pages are blank.) In addition, in trying to keep things short, the book offers so little background and history of I Ching that it becomes akin to merely consulting one’s newspaper horoscope and does a disservice to the culture from which it evolved.

Many books exist about the I Ching. While Nelson notes that he will include a reading list at book’s end, this list appears to have been forgotten. This is unfortunate, as a more complete introduction by another I Ching practitioner would have provided the needed cohesion for this short work.