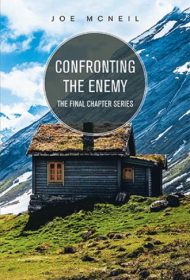 Michael is taking a much-needed vacation in the Colorado mountains when he is startled by gunfire. The gunman, whom Michael confronts, has a seemingly innocent explanation: He was stalking an aggressive bear.

Shortly thereafter, though, a distraught woman flags Michael down. She introduces herself as Cheri Ferguson, and he learns that she’s a government operative investigating Shawn Delaney, a smuggler who trades Canadian black-market pharmaceuticals for U.S. military secrets and is in league with the gunman. Someone has compromised Cheri’s mission, leaving the rest of her team dead or wounded. She turns to Michael for help.

The two quickly become lovers. Michael agrees to help her complete her mission, summoning his old agency friend Mark Dillingham for assistance. With bad guys on their trail, they go on the run, evading and perpetrating double crosses in pursuit of Delaney.

Although this could be fodder for an exciting tale, Confronting the Enemy is too flawed to be satisfying. The plot unfurls unevenly, with only occasional bursts of action. Chunks of its slim page count focus on characters fixing coffee or eating in a Chinese restaurant. Unnecessary flashbacks also slow the momentum, while the writing style is generally unengaging or awkward (e.g., “a knock on the door caused an un-calming of my nerves”).

Additionally, the characters are too thinly developed to be sympathetic, leaving readers unlikely to suspend their disbelief at, for instance, Michael and Cheri’s whirlwind affair or Michael and Mark’s ability to call the president of the United States directly. Finally, run-on sentences and word choice and spelling issues abound: “Mark’s strong suite [suit]” and “alright” for “all right,” for example.

Overall, Confronting the Enemy requires further development to appeal to readers in the crowded thriller genre.