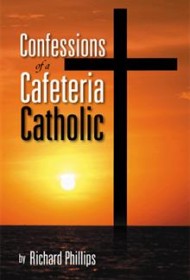 This collection of 45 short essays touches on faith, doubt, forgiveness, the institutional church, celibacy and the priesthood, raising a family, and other topics, both light and heavy, that occupy the thoughts of the average Catholic in the pew.

Richard Phillips is a Nebraska born-and-raised cradle Catholic who, after a brief, youthful stint studying for the Catholic priesthood, chose the layman’s life. He married a Lutheran woman and raised his children in the Lutheran Church, but he has always considered himself Catholic. Now a grandfather, he has observed and lived decades of change and continuity in the Catholic Church and in his own faith life. He sees life as “an ongoing, ever-evolving journey” and says that this collection of thoughts “may not be the end of my faith story.” For Phillips, the 1950s-era conception of a “God of reproach” has given way to a “God of approach.”

Phillips believes that many seek a faith that helps them find themselves and God, that pride and despair can block the path to discovery, and that “there are as many paths to that goal as there are individuals trying to attain it.” This broad-minded view seems to come from his lived experience of thinking about faith and observing others explore and change. He has arrived at hard-won truths: “Life is not inherently bad”; “Return evil with good”; “ Cultivate an attitude of love, forgiveness, hope, satisfaction and openness.”

Confessions of a Cafeteria Catholic is the collected musings of a heartland Everyman raised in the pre-Vatican II church and living in the 21st century. It can offer insight to pastoral leaders and church reading groups, providing an opening for discussion of the questions that occupy the thoughts of many of the elder generation who have lived through so many changes.