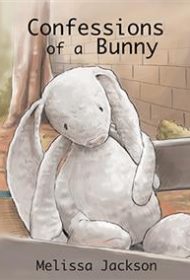 A stuffed rabbit named Bun Bun tells the story of her life in Melissa Jackson’s humorous picture book, Confessions of a Bunny.

“If you can believe it, I was once pink,” a shabby Bun Bun announces. Bun Bun’s coat is now gray and stained, thanks to “her person,” a little girl named Reagan. With her dry humor, Bun Bun tells the tale of their life together, from the early days in the crib where Bun Bun would “just watch her sleep and stare at the ceiling fan,” all the way to Reagan’s first year at school. But when Reagan throws Bun Bun out the car window, Bun Bun must face the terrifying possibility that she might have lost her person forever.

Bun Bun’s voice is well-defined and charming. Her sense of humor and mild cantankerousness will amuse adults as well as children. Bun Bun’s fear at being lost reveals the book’s heart, showing Bun Bun’s love for the little girl who drags her around by her ears.

There is some conflict between the intended audience and the density of the text, however. The story will resonate best with children under the age of 8, but there are times when Bun Bun’s narration may be too advanced for young readers. (At one point, Bun Bun fears she will be “left wedged between decorative pillows and pristine stuffies staring at a wall.”) Much of Bun Bun’s wry humor sounds adult-like, so some of it may be lost on the audience as well, although there are still plenty of giggles in store for them. The pastel illustrations by Shannen Marie Paradero are lovely and approachable, even though the overly mature facial details on the children are a little unsettling.

Overall, Confessions of a Bunny is a funny and relatable read-aloud—one destined to charm all “stuffies” and their people.