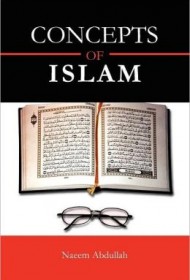 African-American Naeem Abdullah converted from his childhood Christian faith to Islam after hearing speeches by the late Malcolm X. When the Nation of Islam movement split after the death of founder Elijah Muhammad, Abdullah followed the leadership of Muhammad’s son, Warith Deen Muhammad, rather than that of Louis Farrakhan. Concepts of Islam is Abdullah’s second book, which, he says, builds on his first work: Islam: A Favor To Humanity (sic).

The book consists of 22 chapters, varying in length from 2 to 57 pages. The unevenness of chapter length is indicative of the work’s quality overall, with a moving personal testimonial marred by often poorly supported religious arguments and all-too-many typos and punctuation and grammatical errors.

Concepts of Islam recounts basic Muslim history and religious principles and frequently takes issue with worldviews–particularly Christianity and Judaism–that disagree with Islamic beliefs. Abdullah promotes the Muslim concept of tahrif, the idea that the biblical text was corrupted or distorted by Jews and Christians (“they twisted the words therein in order to suit their own purpose”), yet he does not show how or when the text was changed–a substantial omission, given that Hebrew (Old Testament) and Greek (New Testament) manuscripts of the Bible predate the Qur’an by hundreds of years and are still extant.

Abdullah’s discussion of jihad is equally problematic. (He rejects the idea that jihad is meant to dominate others who don’t accept Islam, while asserting that, “Islam [sic] aim is for religious freedom, [sic] Muslims are to fight to bring this about.”)

While occasionally insightful, this book can be a difficult read. Given its unevenness, it seems that the author’s best advice is his closing encouragement: “I urge all who read this manuscript and are not familiar with the Holy Quran to purchase Holy Qurans and read this Glorious Book for your self [sic], start to form your own opinions . . .”