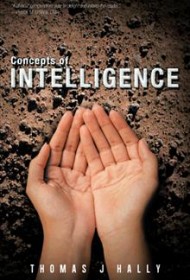 Thomas J. Hally certainly has the bona fides to write authoritatively about intelligence. A featured writer for the Mensa International Journal, he’s also part of an even more exclusive club: the International Society for Philosophical Enquiry, which admits only people who have graded better than 99.9% of the population in cognitive ability.

Concepts of Intelligence is a collection of 30 essays by Hally about intelligence theory as it relates to a broad range of concepts. A small sample: whether physically attractive people are more intelligent, whether night owls are more creative and whether birth order plays a role in intelligence quotient. Each subject gets its own chapter, and most chapters run four to six pages. On each topic, Hally gets in and out without becoming too mired in minutia, which is beneficial to the reader.

Perhaps because these essays were mostly intended for people with high IQs, however, Concepts of Intelligence lacks the broad accessibility of a book like Freakonomics, which applied economic theory to everyday topics in a way a layperson could easily understand. While the writing is straightforward, it’s still likely a bit too academic for the average reader.

In his conclusion, Hally acknowledges that “there is no ‘logical progression’ from one essay to the next,” which is true. He says the concepts build on each other in a general sense, which is possible, though topics such as “What is Wi-Fi and how does it work?” seem incongruous with most of the other subjects he covers

That said, many of the book’s essays present interesting ideas. Readers curious about how intelligence relates to various other aspects of life will find intriguing food for thought in these pages.