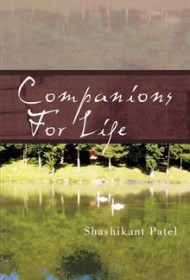 Companions for Life is a sometimes precariously plotted novel that nonetheless provides a revealing look at rural life in the western Indian state of Gujarat.

Overseen by Hindu deities, mysticism, astrology and tradition, the citizens of a small village tend to their fields and to their daily lives with a resigned fatalism and a belief that a hardscrabble existence is their destiny, at least in this life. But underneath the spiritual facade there is scheming, backbiting and plotting that sets neighbor against neighbor, turns love into hate, friends into outcasts.

The novel traces the bumpy road to love traveled by a girl, Rupa, and boy, Abhesinh, who meet as teenagers and spend the rest of the novel being pulled apart by jealous others and pushed back together by currents of the “beautiful brook of love in their hearts.” The villain of the piece is Mangla, the wife of Abhesinh’s guardian and “one of the worst persons in the village,” who will stop at nothing to keep the couple apart. Her gossipy manipulation of facts and outright distortions eventually persuade gullible villagers, including most damagingly Rupa’s stepmother, that the innocent young man was indeed “born with evil stars” and that all will be right with the gods if he is shunned.

But finally, in an unlikely couple of paragraphs, all of the many conundrums of the novel are far too neatly resolved, and life returns to its precarious normal.

The narrative is often awkwardly written (“he had trouble for speaking”) and jumps from character to character and place to place in a distracting fashion, making it hard to keep up with everyone and every locale. This will detract many readers. What is noteworthy and fascinating, though, is the author’s detailed account of Hindu life, from the wedding ceremony to the funeral pyre and many of the stops in between.