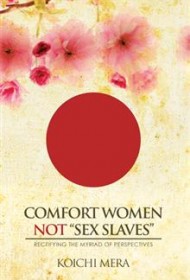 Many of these women were, according to scholars, confined in brothels against their will. But Japan’s current administration under Prime Minister Abe has waged a tenacious campaign against the mainstream view that they were sex slaves, going so far as to ask former United Nations special rapporteur, Radhika Coomaraswamy, to change her findings in a report on the comfort women, and to ask the publishing company, McGraw-Hill, to alter passages in one of its textbooks.

Mera unequivocally aligns himself with Abe’s revisionist stance, claiming that there is no evidence to support the view that the comfort women were sex slaves. Among the documents and arguments he produces to support his position are a lengthy discussion of South Korea’s influence in the wording of the Kono Statement, which acknowledged the Japanese military’s involvement in the establishment of comfort stations; a U.S. army report which stated that the comfort women were nothing more than prostitutes; and the discrediting of an author who claimed to have abducted Korean women for comfort stations.

Although some of Mera’s points are worth noting, his book appears to be hastily written. Some passages refer readers to the wrong exhibit in the text and quotes and position statements are not always credited to a particular person. In addition, Mera is at times disingenuous, as when he discusses a lawsuit against the erection of a monument for the comfort women in Glendale, California, but fails to mention that he was a plaintiff in the case. All of these factors tend to weaken his overall authority.

Mera’s book is too short to deliver a comprehensive or compelling argument. Still, for those interested in a different viewpoint than is traditionally espoused, it does offer insight on the perspective of those who claim that Japan was unfairly accused of enslaving the comfort women.