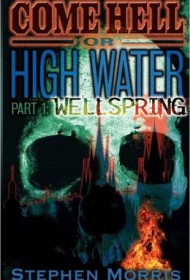 This supernatural suspense – which has intertwining storylines set in 14th century and modern day Prague – is the beginning volume of a trilogy that has the potential to be a genre-transcendent epic à la Deborah Harkness’ bestselling All Souls trilogy (A Discovery of Witches, et. al.).

Blending together history, folklore and occultism, the story revolves around Magdalena, a young Czech who works as the secretary for a professor of medieval Bohemian literature at a Prague university. During a vacation to New York City, she receives a fateful tarot reading that sets her on a dangerous path of self-discovery and, perhaps, self-destruction.

Back home in Prague, her continuing examination into the significance of her reading leads her to the historic Charles Bridge, where she meets the spirit of Fen’ka, an old woman accused of witchcraft back in 1356 and burned at the stake in the town square. Just before she died, she cursed the townspeople: “When this fire dies, let all their nightmares come to life.” Now, more than 600 years later, Fen’ka enlists Magdalena to help her gain justice. The task, however, is complicated – and could unleash all kinds of monstrosities.

Powered by lush storytelling, adeptly developed characters, and numerous historical references, the book’s only real flaw is its pacing, which at points becomes bogged down by an unwieldy narrative more concerned with meticulous description than momentum. Additionally, the novel’s nebulous title – as well as its misleading cover art (it looks like a mainstream horror novel) – will make it more difficult for it to find its way into the hands of readers who would enjoy it most.

Ultimately, Wellspring is essentially the foundation for the presumed epic story to come – the calm before the storm. The tantalizing cliffhanger at novel’s end will have readers seeking out the sequel, entitled Rising.