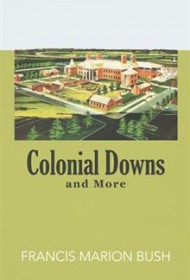 Devotees of horse racing in Virginia–especially the ones wearing suits and ties or cocktail dresses– will find information to savor in this no-nonsense history, directory and record book. Francis Marion Bush, a Kentucky-born horse owner and longtime member of the Virgina Thoroughbred Association, has taken pains to compile all manner of fact and minutiae about the Sport of Kings in that state, including a detailed account of a hard-won social-values battle in the 1980s to legalize pari-mutuel wagering and build a major racetrack–Colonial Downs, near Richmond.

Even casual racing fans know that the great 1973 Triple Crown champion Secretariat was bred at Virginia’s Meadow Farm. But who remembers that a filly called Petunia won Colonial’s 1998 Tippett Stakes, covering the mile in a leisurely 1:36:52? Or that J. North Fletcher, who died in 1984, and his wife, Elinor Leh Fletcher, gone since 1994, founded Crestone Farm, in Warrenton? Bush informs us of many such things. Among the charts, graphs, maps, lists and thumbnail biographies stuffed into this slim volume, he even includes three pages of pictures showing the exteriors of Virginia’s 10 off-track betting parlors.

There is very little actual writing in Colonial Downs and More, and what there is lacks the drama of, say, an all-out three-horse duel in the deep stretch. Sample: “DeFrancis’s plan proposed developing a $55 million facility that could accommodate 6,000 fans on an average weekday . . . the facility could make use of surrounding areas, including picnic gardens that could allow up to 16,000 on the highest days of attendance.”

Little matter. Virginia-based hardboots and their well-heeled patrons up in the Colonial Downs turf club, maybe even a couple of cigar-chomping railbirds with their binoculars trained on the backstretch, will want this plain-spoken, highly-specialized book for the reference shelf.