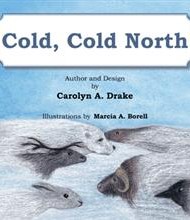 Carloyn A. Drake’s Cold, Cold North is replete with both the sense of wonder that inspired it and the common flaws of a first picture book. Fortunately, supported by mostly successful illustrations by Marcia A. Borrell, the wonderment prevails in a book that takes a look at arctic wildlife in its snowbound and windswept environment.

Tense changes also mar the story with the sudden interjection of the past tense well into the book on a page that describes lemmings. By the time this occurs, it seems likely that the writer has so enjoyed envisioning each scene as a separate unit that she has lost the story’s flow from page to page.

Fortunately for Drake, her vision helps to carry the book despite these flaws. Cold, Cold North offers a frozen landscape populated with creatures, such as lemmings and caribou, that are not particularly common in picture books. Some careful copyediting and softening of a few stiff illustrations (such as the fox and hare in the fourth spread) would go far to making a second printing of this promising effort a more polished production.

Meanwhile, the “Questions for Thought and Discussion” at the close of the book include two that may truly inspire: “What does ‘cold’ look like? Can you draw ‘cold’?”